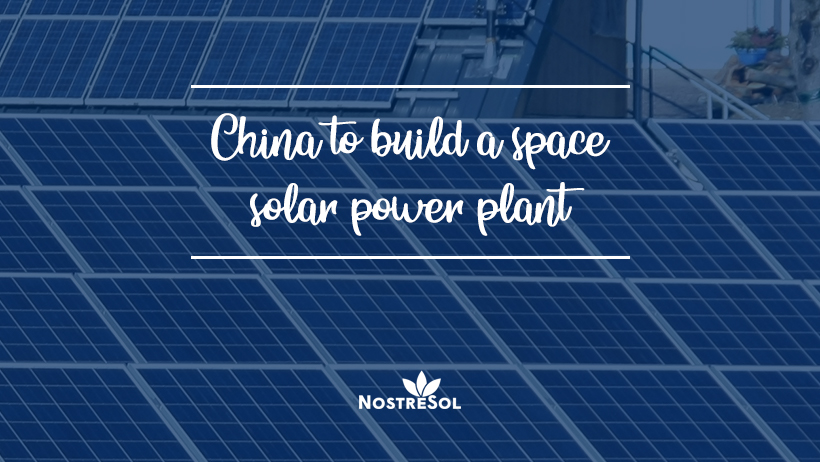 Today, the world is becoming increasingly aware of climate change. We must take care of the planet by making use of clean and renewable energies. For this reason, wind farms, solar farms, hydroelectric plants, etc. have been built in many parts of the world over the years. These are limitless energies, as they are obtained from nature's inexhaustible resources. However, depending on the weather, obtaining this energy becomes irregular. But what happens if we change location and obtain all the necessary energy from space?

After years of research, China has announced that it will launch the first power station into Earth orbit in 2035. A solar power plant over 1 kilometre long, it will use a laser beam to send all the energy it needs to planet Earth.

This plan was already popularised in the 1940s by the American writer Isaac Asimov. In one of his stories he wrote about the crazy idea of building a solar power plant in space. A few years ago, NASA began to study the idea, and the project was backed by an investment of 15.4 million dollars for its implementation. But in the end, it was abandoned for lack of political support.

China now has concrete plans, has all the necessary technology in place and has already set dates for operation. In June this year, the project was restarted and construction will be completed by the end of the year. This will require up to 100 launches of the Chinese-made Changzheng-9 (Long March 9) super heavy rocket.

By the time the power plant is in orbit (more than 36,000 km above the Earth), the idea is for it to operate day and night. Unhindered by the shadow of the Earth, this solar power plant can collect energy 24 hours a day, 7 days a week. In addition, it is always midday in space, so the solar panels will be able to receive much more powerful and continuous energy than if they were placed on Earth's soil. It will be able to send out a similar amount of energy to that generated by a nuclear power plant. And another plus point is the fact that the lasers can be redirected to any part of the planet. In this way, they will be able to power power plants all over the world except at the poles.

First, the researchers must test and demonstrate that the way energy is transmitted by a laser beam works over long distances. In addition, it must be taken into account that the large solar panels will continuously rotate to chase the sun, so that they could create some vibrations that interfere with the operation of the laser, causing it to misfire.

The radiation problem must also be considered. According to a study by a research team at Beijing Jiaotong University, people will not be able to live within 5 km of the receiving station on Earth because of the high level of radiation in the area. Moreover, the central experimental area of 2 hectares is surrounded by an exclusion zone that is 5 times larger.

Another potential problem is the impact of this form of energy harvesting on bird life and other species. And finally, the concern about the effect on global temperature, which also needs to be analysed.

First, several prototype solar power plants will be sent into the stratosphere between 2021 and 2025. This will be followed by the launch of the 1 megawatt orbiting power station in 2030 and a much larger station (capable of generating gigawatts) in 2050. It will be a big change in the life of our planet and in everyone's life. But don't forget that you can also contribute from your home, doing your bit to improve sustainability. If you want to know how, contact us.